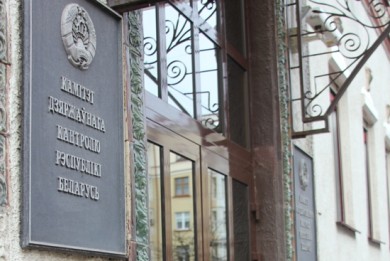 13.07.2020 Representatives of the State Control Committee took part in the 15th meeting of the CIS Council of Heads of Financial Intelligence Units

Given the restrictive measures introduced by Member States related to the pandemic, the 15th meeting of the Council of Heads of Financial Intelligence Units of the Commonwealth of Independent States was held as videoconference.
The event was led by Chairman of the Council, Director of the Russian Federal Financial Monitoring Service Yuri Chihanchin.
Director of the Department of Financial Monitoring of the State Control Committee Vyacheslav Reut represents the Republic of Belarus in this Council.
Within the framework of the event, issues of implementing the CIS interstate programs to combat crime were considered, interim results were summarized and further areas of cooperation were discussed to identify and suppress the activities of professional “laundering” sites, international terrorist organizations and their cells operating in the CIS space.
As promising areas of cooperation, countering the challenges and threats in the cryptocurrency environment and the creation of an international center for assessing the risks of money laundering and terrorist financing with national segments in the member states of the Council and the exchange of relevant information were noted.
During the meeting, the participants discussed issues of expanding the regulatory framework for cooperation by signing the Treaty of the CIS member states on countering the legalization (laundering) of proceeds from crime, the financing of terrorism and the financing of the proliferation of weapons of mass destruction, and strengthening the human resources potential of Council members.
In the case of positive dynamics of the epidemiological situation in the world, the next 16th meeting of the Council will be held in November 2020 in the Republic of Uzbekistan.
Print version
To list
Photo